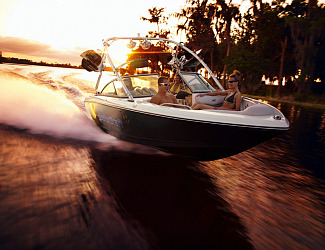 Executive information on Park City boat rentals and watercraft rental.  Park City is a town in Summit and Wasatch counties in the state of Utah.  It is one of two major resort towns in Utah, the other being Moab.  Park City offers ski boat rentals, jet skis, waverunners, and watercraft rentals to be used at the five lakes within 30 minute drive.  It is considered to be part of the Wasatch Back. The city is 32 miles southeast of downtown Salt Lake City and 19.88 miles from Salt Lake City's east edge of Sugar House along Interstate 80.  On average, the tourist population greatly exceeds the number of permanent residents.  This is home to several major film festivals near by.

After a population decline following the shutdown of the area's mining industry, the city rebounded during the 1980s and 1990s through an expansion of its tourism business.  Park city currently brings in many people for snow skiing, water sport lessons, wakeboarding, wakeskating, water skiing, wakesurfing.  This brings Utah Economy as a tourist hot spot.  Park city has three major ski resorts: Park City Mountain Resort, Deer Valley Resort, and The Canyons Resort. The Park City and Deer Valley ski resorts were the major locations for ski and snowboarding events at the 2002 Winter Olympics.  Although they receive less snow and have a shorter ski season than do their counterparts in Salt Lake County, such as Snowbird resort, they are much easier to access.  Enjoy the official watercraft, and boat rental company servicing Park City, Utah.